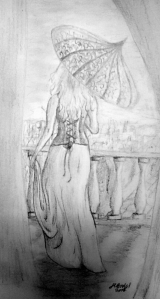 It had been six days, seven hours twenty one minutes since she arrived. The incubation period should be over for that most victorian of diseases. It was almost a shame not to have an excuse to tighten her steel boned corset, take out her black lace parasol and lounge upon the balcony in extremis. The heat of a fractious summer evening billowed lazily through luxuriant velour drapes. There had been something gracious in the way that she had bitten her tongue, hadn’t there? Something virtuous in keeping things cordial, just a single drop of blood in her glass. If only she hadn’t mentioned the gala, perhaps her temper, and the wallpaper could have survived undisturbed. Everything still retained the heavy scent of aniseed, permeating through each fibre. What a waste of good wormwood. What a wasted night. Pushing the curtains aside, and eager to drink in the last vestiges of sunset air, she slipped outside. From here the streets looked like an intricate painting; oily veins of concrete, meandering their clogged ways to the ticking centre. She watched the technicolour smudges with legs that plied their great social evil on the streets. Too out of focus, as they were, to cause her a reaction. How many unspoken conflicts had passed these last few days, and how many, in passion, had been shattered then remade into something more delicate?
She leant against the cool metal railing and strained to hear the muffled album leaf that tumbled from inside. It wasn’t the first time that drinks were spilt in anger, but it somehow felt different. More finite. The balance had shifted. Maybe the fever was finally seeping in, two hours too late. She felt for the beaded choker around her neck and carefully unclasped it. Strands of her blond hair cruelly trapped within its mechanism. The vascular gods were demanding a sacrifice, and only obsidian would do. Inhaling slowly and rubbing the beads between her sweating fingers she faltered in her mesmerised state. Something twitched in the corner of her desolate fixation. She shivered to shake off her doubt and just as she resolved to destroy this memento, to make the offering, she felt a gentle breath on her nape and two slender, familiar arms slipped around her waist. 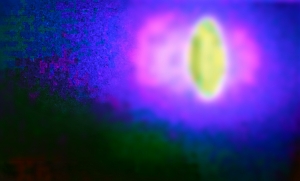 The solitary magpie visits started on the day he got the call. He couldn’t help but  wonder whether his sorrow should have been kindled by loss or guilt.

Each time the tremulous tinted visions descended, it wasn’t concern that the world had changed beyond recognition that burnt a hole in his chest, but rather the stifling fear that this rural pocket of England had been somehow trapped in an earlier decade, unwilling and unable to yield, a relic steeped in pain. The newsreel span through a progression of intricate movements, but for this picturesque hamlet, all outside influence was seemingly repelled by the protection of the weather-beaten sign that she had painted. The petrol station nearby still manned by a local family who used to organise summer cricket matches on the well-manicured green and still do.

Memories and fevers had kept him from going back there for so long. Even in the throes of her illness when her voice became unfamiliar, he couldn’t bring himself to swallow the fear and take her hand. The burden of the past just felt too great, and so instead he hugged his knees in solitude some hundred miles away, wishing that the only thing that had changed, could have stayed the same. That she could have kept her mind.

The lillies started arriving soon after. Little bottle-green Honda’s saturated with the stench of stargazing sympathy.

Everything served as a reminder that he was the last of his line.